Last week, I wrote about Tarzan actor Buster Crabbe playing the second fiddle to Johnny Weissmuller. This week, it is Crabbe’s turn to play the lead, and his sidekick is a very interesting actor named Prince Modupe. If not for these two actors, the B-movie Nabonga would have been easily forgotten. 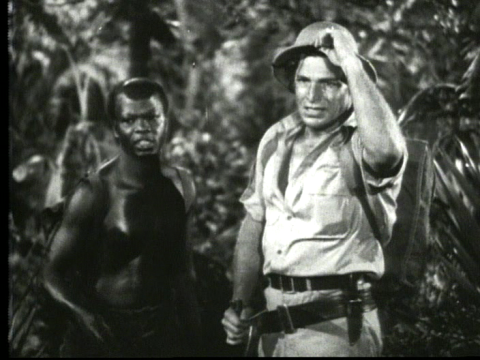 Every once in a while, one of the Tarzan actors would turn out to actually have an acting talent, and would go on to make a decent acting career. Crabbe was one of these. Like Weissmuller, he was an Olympic swimming gold medalist. He made his Tarzan appearance in a 1933 serial, Tarzan the Fearless. The serial is now lost, but a feature film version remains. Interestingly it was produced simultaneously with Weissmuller’s first Tarzan for MGM, due to conflicting contracts (somewhat similar to the situation with James Bond in the 1960s). Crabbe followed a long tradition of Tarzans recruited for their physique rather than any actual acting talents. Indeed, his Tarzan role did not allow for much acting on Crabbe’s part.

This is where history loops back, because the story of Nabonga centers around the girl Doreen (played by Julie London) who is stranded in the jungle and raised by her father and a gorilla. It is clearly inspired by the story of Tarzan, and undoubtedly made to capitalize on the Tarzan films (still with Weissmuller in the lead at this time). So Crabbe comes back to the Tarzan theme, but from the opposite direction, so to speak, as the romantic interest of the female “Tarzan”.

Prince Modupe plays Crabbe’s sidekick Tobo. At a time when black people generally were subject to simplified stereotyping, Modupe managed to play roles where he actually appeared as a human, not as a stupid native or savage or servant. Born in French West Africa, Modupe’s village had very little contact with white people, yet young Modupe (“Prince” was originally his royal title, apparently) managed to get a European education and later worked in the US as a writer, composer, producer and actor. Beyond that, I was able to find very little information on the Internet, but this is one personality whom I would love to find out more about.

The nice chemistry between Crabbe and Modupe lifts this film from the turkey pit and actually makes it enjoyable, at least in part.

One more actor deserves to be mentioned, namely Ray Corrigan. The guy in the gorilla suit. The suit was apparently Corrigan’s private property, and some periods of his career he specialized in gorilla roles. 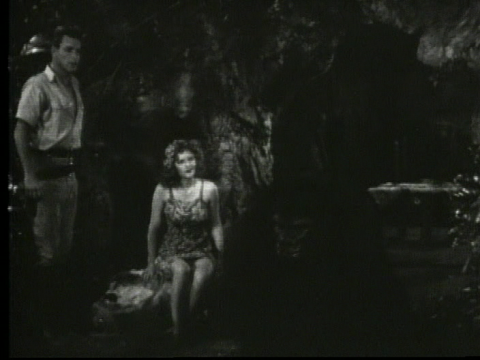