When the United States entered World War II after the bombing of Pearl Harbor, it became necessary for the government and military to explain to people in general just what the war was all about. Why they were fighting and who they were fighting. The assignment to create a series of propaganda films, collectively titled Why We Fight, went to Frank Capra. These classic films are all available at the Internet Archive, and today we take a look at the second of the series, The Nazis Strike. 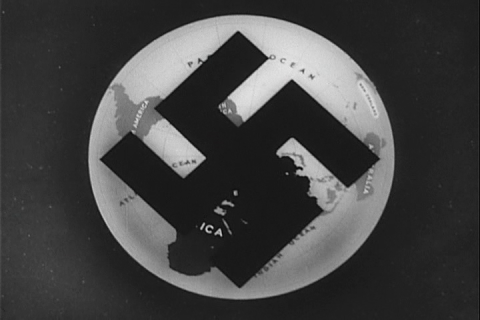 The film describes mainly Nazi Germany’s occupation of Czechoslovakia and Poland, and thereby the events immediately before and after the beginning of World War II. It does so mainly by using German news and propaganda films. Through ingenious editing and splicing the whole thing together with animations (mostly strategic maps) made by the Disney Studios, Capra puts the German material in a new light, turning the German propaganda into American propaganda.

But the most disturbing part of the film is the beginning, where Nazi methods of propaganda and infiltration are described. Most startling is, perhaps, a scene from a meeting of the Nazi American federation known as the German-American Bund (see image below). During the meeting, guards drag away and beat up a person who seems to a protester. Frightening parallels come to mind with today’s political realities.

The best versions of the films in the Why We Fight series can usually be found in the FedFlix collection, along with thousands of other films produced for the U.S. government. Not only military films with great historical value, but also films about energy, education, health and just about any other subject that a government could want to inform about.

Below follow links to the complete series Why We Fight.

I will probably write in more detail about a few of the others in the future.

This film is best enjoyed for its novel and beautiful turning German propaganda into highlighting the dangers of Nazism. For historical facts, this film, as all propaganda, should be used with considerable care.