Those who are used to Hitchcock’s Hollywood productions will find a great many surprises among the genres of his earlier films made in England. But although very different from his “classic” suspense thrillers, these films should not be dismissed off-hand. Many show excellent qualities and you can see Hitchcock perfecting his skills. The last film of any kind that Hitchcock made before moving to Hollywood was the historical thriller Jamaica Inn.

The film centers around Jamaica Inn on the coast of Cornwall (a real place, apparently still in business) which is the base of operation for a band of cutthroats and plunderers, who lure ships to run aground on the rocky shores. To this accursed and feared place, young Mary (Maureen O’Hara) arrives to visit her aunt, who is married to the innkeeper. The plot thickens as one of the gang members (Robert Newton) is suspected of taking loot for himself. From there on it is a sometimes tight, sometimes slightly contrived plot of chases, changing loyalties and secret identities.

It appears that neither Hitchock himself nor Daphne du Maurier (who wrote the book upon which the film is based) liked the finished film. Certainly, it does have a number of shortcomings, but it is nevertheless worth watching. It has a dark and eerie tone which, coupled with some unexpected comic relief, gives the film a unique creepy feeling. Jamaica Inn may not be among Hitchcock’s greatest films, but regardless of what people say, it is far from one of his worst.

This film is best enjoyed as part of Hitchcock’s legacy, but another good reason is Charles Laughton who plays the bad guy. I have seen few films with Laughton, but I find that he is always excellent. Even though Maureen O’Hara (also good) may nominally be the protagonist, Laughton tends to take over and dominate the picture, all for the good. Other films with him at the Internet Archive include The Private Life of Henry VIII (1933) and Captain Kidd (1945). 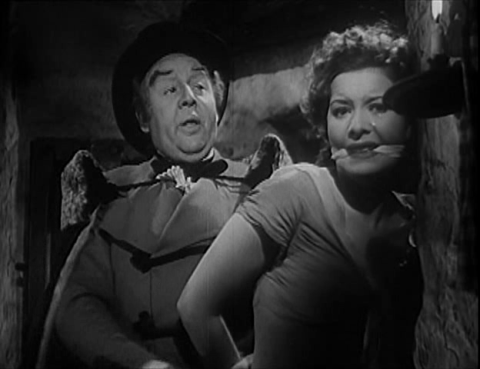