When I think about Frank Sinatra, I think about him as a singer. But he also acted in dozens of films, mostly during the 1950s and 1960s, and he was not a half bad actor. Today, his acting is perhaps best remembered for roles in classics such as From Here to Eternity (1953), Ocean’s Eleven (the 1960 original) and The Manchurian Candidate (1962). But he made many other memorable performances, not least so in Suddenly. 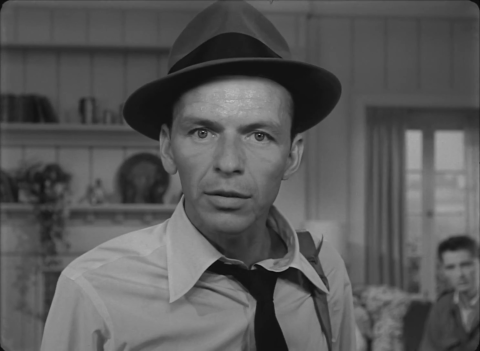 Here, we see Sinatra as a cynic war hero who has turned into an assassin, taking money for doing what he does best – killing people. He has taken on the job of shooting the president of the United States, and decided to do so in a small town named Suddenly. There his chosen firing position forces him into a close encounter with the local sheriff and the sheriff’s sweetheart, the widowed Mrs. Benson who lives with her father-in-law and her son.

During the first part of the film, the acting feels a bit stiff, especially by Stirling Hayden, who plays Sinatra’s nemesis, the sheriff. Hayden was an excellent actor, and the stiffness was no doubt deliberate on his part. He must have wanted to create a slightly boring but totally dependable and patriotic hero, just what American movie-goers needed at a time when the world seemed a very dangerous place to live, and the president was much more of a symbol for the entire nation than is perhaps the case today.

Suddenly was remade in 2013 by Uwe Boll, but the remake is said to be far inferior to the original.

This film is best enjoyed when you understand some of the political undercurrents of the time. The moral message of this film is perfectly clear: Unless you have a bigger gun than your enemy, and unless you are prepared to use it, he is going to make you suffer. In that respect, you can see this film as a metaphor for the entire Cold War. Sinatra and his gang represent the communists, and his sniper rifle represents their nuclear arsenal. It is a good thing there were still righteous Americans around in the 1950s. 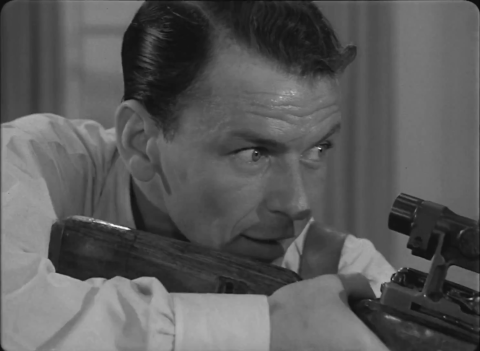