I sit here on Christmas Eve, surrounded by family, waiting for Christmas dinner to be prepared and for presents to arrive (where I live, Christmas Eve is more important to celebrate than Christmas Day). Every year, I try to include at least one Christmas themed movie around this time. This year, I have chosen the classic Love Affair.

True, the entire film is not about Christmas. It is only in the last twenty minutes that the Christmas theme comes in, but it is fitting enough at that point, because that is where the film turns into a real feel-good melodrama. I will not reveal too much of the plot, except to say that it involves true love at first sight, forced separations, great personal sacrifice, and I do not think I spoil too much by revealing that there will be a happy ending, although one not entirely without complications.

Like many other popular old movies, this one was adapted into a radio play, and Irene Dunne even reprised her role from the film. I have not listened to this particular adaptation, but those old radio plays are often very good. If you are interested, Love Affair and many others are available as part of the Screen Guild Theater series.

This film is best enjoyed because the chemistry between Charles Boyer and Irene Dunne is excellent. The plot have a few weak moments if you start analysing it too closely, but Boyer and Dunne nevertheless manage to make the story believable.

Alexander Korda was a very solid British director, perhaps best known for participating in the 1940 remake of Douglas Fairbanks’ The Thief of Bagdad (1924), which is considered to outshine even the spectacular silent original, and which was a major source of inspiration for Disney’s Aladdin (1992).

In the 1930s, Korda made three films that are so thematically similar that they must be considered as a trilogy. The Private Life of Henry VIII (1933) and The Private Life of Don Juan (1934) have already been reviewed on this blog, and the turn has now come to the third film, Rembrandt.

All three films are biographies of various European personalities in the 16th and 17th Centuries, two historical and one fictional. All three can be traced in various ways to the reformation and counter-reformation, although admittedly this is a theme that does not shine through in the films. All three films also deal with lost loves and with the agonies of growing old.

Rembrandt begins with the death of famous painter Rembrandt van Rijn’s wife Saskia. The film then follows Rembrandt’s remaining life with its numerous sorrows, but most of all it is a powerful portrait of a strong and gifted artist, who at all costs stayed true to his own vision and character. When his friends implore him to paint nobles (who can pay good money) in the traditional style, Rembrandt prefers to develop his own personal technique on motifs of his own choosing. For example, he picks a beggar off the street and dresses him as a biblical king.

This film is best enjoyed for Charles Laughton’s exquisite performance as the famous painter. The film is well made overall, but the story lacks that extra edge that would have secured its place as a great classic, partly because it is a bit shattered and out of focus. As it stands, Laughton makes it well worth the effort of watching, but you may want to go for The Private Life of Henry VIII first, also with Laughton in the lead. Comparing these two films with one another will give a good picture of Laughton’s great versatility as an actor. 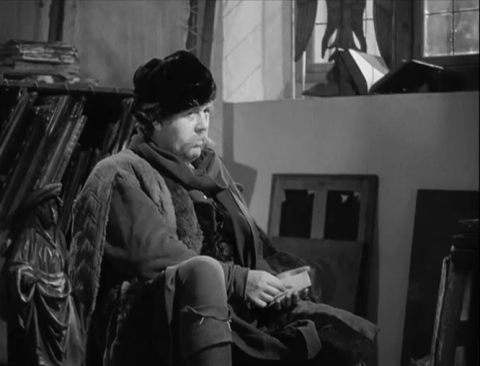 Lon Chaney. That is all that really needs to be said, and the review could end here. But perhaps a few things about the film The Penalty should be added, just for clarity.

The plot is actually very interesting, even without Chaney’s magnificent interpretation. A young boy gets both his legs amputated by mistake. As he grows up, unloved and unloving, he gets involved with the criminal underworld, eventually rising to become a minor but ruthless crime lord, nicknamed Blizzard, and with aspirations for greatness. He has many young girls among his underlings, and his favourite gets to pedal his piano (since his handicap prevents him from doing so himself). The police has nothing substantial on him, so they decide to send their best female agent. Meanwhile, Blizzard is planning revenge on the doctor who amputated his legs, and on his beautiful sculptor daughter.

Even though it tends to get a bit melodramatic at times, this plot along with the crew’s skillful work are almost enough to raise it to the level of memorable contemporary pieces, such as Das Cabinet des Dr. Caligari, The Mark of Zorro or Klostret i Sendomir. But then along comes Chaney and quite by himself elevates the whole thing to the level of masterpiece.

This film is best enjoyed for Chaney’s brilliant acting. He is in total control at every moment. Someone compared him with the Robert De Niro of silent film, and there is some truth in that. Not only because of the acting, but also because of his absolute devotion to each role. For this film, he built a contraption that tied his legs up so that he looks totally convincingly amputated. It is said that it was so painful that he could only wear it for ten minutes at a stretch, and still the man could act better than most of today’s stars.

Today it is ecaxtly one hundred years since World War I broke out. This tragic conflict, one of the most terrible in human history, has been depicted on the silver screen many times. One of the first great films (perhaps the first) to emphasize this tragic aspect was The Four Horsemen of the Apocalypse, the film that catapulted Rudolph Valentino to stardom.

Many people still think that Rudolph Valentino was a great actor. To me, it seems that his greatest talent was to look like he is about to burst into tears any minute. Even when he smiles. Well, even I have to admit that he was good at using small details in his facial expression and body language. Be that as it may, many of his films are wonderful; well-produced, epic and still today captivating. The Four Horsemen … is one of his best.

Actually, the War does not begin until about halfway through the movie, and even though it is an imporatant backdrop to the later part of the film, this is a film about people and ideas, less about the war as such. It begins with a wealthy Argentine patriarch and his two sons-in-law. One French and one German. The film is clearly anti-German (at a time when the Nazi party had barely been established, the Germans in the film enbrace many ideas that would later come to be associated with Nazi ideology), and consequently, the French son-in-law and his son are favoured.

After the death of the patriarch, each part of the family moves back to Europe. We now follow the French son, Julio (Valentino) and his life in Paris as a playboy artist and dancer, constantly broke and falling in love with a married woman, thus causing a scandal. But just as things appear to go his way, war erupts and turns everything upside down.

This film is best enjoyed if you like Rudolph Valentino’s acting and good looks (he is said to be a favourite with the gay community), but if you are like me and feel some scepticism, it is still a great movie, well worth the more than two hours watching.