Poor Roscoe Arbuckle! Not only did he have to live with the screen name “Fatty,” which he hated, he was also falsely accused of causing a woman’s death by raping her. And even though he was completely cleared of all charges, his acting career was in ruins. In the end, of course, he did not live at all. He died about 80 years ago from a heart attack, only 46 years old.

Before that fateful rape trial, Arbuckle had been the leading comedian in Hollywood. He had acted against both Charlie Chaplin and Buster Keaton before either of them was famous. In fact, he was the one who discovered Keaton and made his career.

It is easy to understand how he came to be known as “Fatty”. His bulk was considerable, but in spite of it he was extremely agile and athletic. These were the days when stuntmen were very rare indeed (in comedies, they almost did not exist). In fact, some of the stunts that were made back then could probably not be duplicated today. They were simply too dangerous.

Arbuckle mostly made short films. Today’s offering was his second longest at only 28 minutes. The Bell Boy is typical of the kind of comedies that Arbuckle produced. Fast slapstick without too much story or character development to get in the way of anything important. The slapstick is often extremely well timed, and partly because of that most of the humour has survived the test of time and still feels fresh and alive today. There is also a fair amount of crazy humour that you would perhaps not expect in a film from this period. A few jokes do fall flat before a modern audience. But almost 100 years later, that is easy to forgive.

Apart from the comedy, the main reason why I enjoy watching these old films is that they allow you a quick trip back in a time machine, letting you see things like horse-drawn trams filmed at a time when they were actually in use. Wonderful stuff!

This film is one of about ten that Arbuckle made together with Buster Keaton and Al St. John. This was a very well-matched trio, not least because all three were excellent at making acrobatic and difficult stunts. See in particular the magnificent “dinner table vault” at 13:10. Keaton, of course, became one of the best comedians of the 20s (some say the best). St. John never went on to stardom, but had a decent career as a B western sidekick in the 30s and 40s. Many of his westerns can be found at the Internet Archive. Billy the Kid in Santa Fe (1941) is a typical example.

The Bell Boy lets you enjoy this magnificent trio doing what they do best. If you want an introduction to silent slapstick comedy, then this is it! The Internet Archive version, unfortunately, contains no soundtrack. This may deter some, but I actually prefer no soundtrack to a poor one.

This film is best enjoyed whenever you feel depressed. Or happy. In fact, anytime. 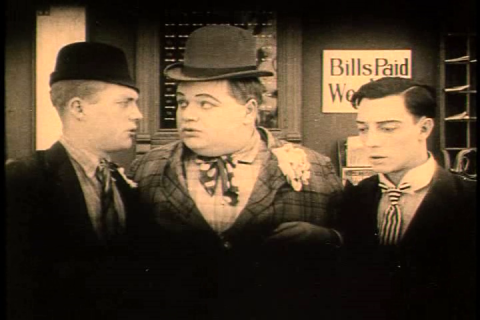 On this day in history, 150 years ago, the battle of Gettysburg began. Whether it was a heroic fight for a noble cause, or a terrible slaughter (about 50,000 dead; almost ten times the population of the town where I live), there can be no doubt that it was an event that shaped the history of the world, in such a way that the consequences can still be felt.

There are surprisingly few interesting movies about the American Civil War on the Internet Archive. One of those few happen to be Buster Keaton’s The General. 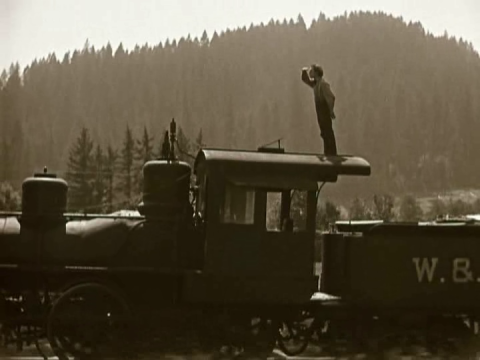 The General is based on the true story of a band of of Union spies who stole a train and drove it through Confederate territory, causing as much damage as possible. They were followed by the train’s conductor with two other men, and this is where Keaton takes off with his story. Keaton takes the role of the train engineer Johnnie, who desperately wants back his train, and also his girlfriend who happened to be on board when the hijacking was made. He has to go through fire and water (literally) to do so. Keaton adapted most of the story to fit the needs of a comedy, but otherwise he went to great lengths to make the details (such as the locomotives) historically accurate. Interestingly, the Disney film The Great Locomotive Chase (1956) is based on the same events, but tells the story from the Union perspective.

Perhaps the most memorable parts of The General are the many amazing stunts and effects, not least the scene where a steam locomotive crashes into a ravine when a bridge falls apart. This was apparently the most expensive single scene to be filmed during the entire silent era, and the locomotive is actually real. It remained there on the bottom of the ravine for decades.

It is very difficult to imagine The General without the stunts. The success of this film builds very much upon the body language and amazing timing of one of the all-time greatest of film comedians. If you have never seen Buster Keaton before, then this is a very good place to start. In my opinion, Keaton has made even better films, but even so it is one of the greatest comedies of the silent era.

When you have finished watching this film, you should take a look at the fantastic blog Silent Locations, which has a post about the film. Make sure to follow the link to the complete presentation about the film. Amazing stuff!

This film is best enjoyed after having been to a good railway museum (such as the one in Kennesaw, Georgia, where the real The General still stands). 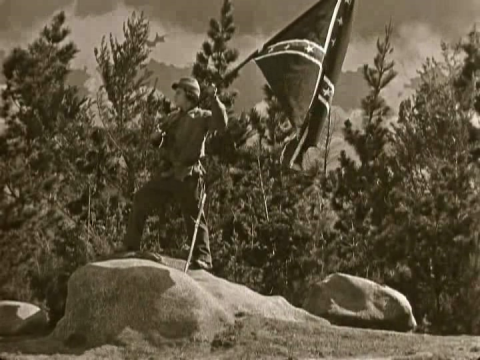