The movie serials of the 1930s through 1950s are very interesting. The plots tend to be formulaic, the acting is usually terrible, and the characters and situations reek of cliché. Yet they can be very entertaining, as long as you do not expect a terrible lot of originality. They are also interesting because of their role in shaping modern popular culture.

Among the clichés are heavily cemented gender roles. The earlier serials of the silent era, as well as some from the early 1930s, often contain strong female characters. Sometimes, the entire plot centered around a female heroine, such as in The Hazards of Helen, several episodes of which are available at the Internet Archive. (I may come back to that serial in the future.) 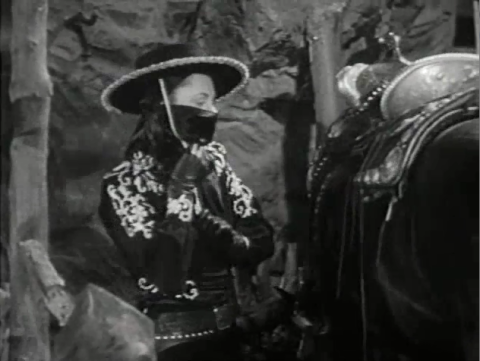 But by 1944, Zorro’s Black Whip, starring Linda Stirling as a female “Zorro” (though that name is never used in dialogue; she is known by the alias The Black Whip), was something truly unique. By that time, female roles in serials had been trivialized to love interests and kidnapping victims. Just what caused the degradation of women is unkown to me, though I understand that with the coming of sound film and a more commercialized movie business, all of Hollywood became more of a men’s playground. Perhaps World War II paved the way for at least this one return to a strong leading woman, but the world was not yet ready for more.

Of course, The Black Whip could not be made too strong and independent. To begin with, she could not create the secret identity herself. She inherited it from her dead brother, and throughout the serial has to pretend to be a man in order to continue her brother’s fight for freedom in 19th century Idaho. And while she turns out to be an expert with the whip and revolver, she naturally cannot fight with her fists, so she needs a strong and able sidekick, government agent Vic Gordon, to act as her proxy in this respect. Oh, and of course he is also her love interest. There can be no 1940s serial without romance. (Vic Gordon was played by George J. Lewis, who was to play Zorro’s father in the Disney TV series over a decade later.)

This serial is best enjoyed for its unusual gender roles. It is a nice and somewhat original take on the Zorro theme, though I would personally hold that the previous serial Zorro Rides Again is better. Especially the ending, which is the weakest part of Zorro’s Black Whip. All things considered, though, this is good watching, and if you like serials it is highly recommended.