Before watching the film The Flying Deuces, I had no idea what the word “deuce” meant (except for the tennis term). I have now informed myself, and I know that it means “pair” or “two of a kind” or something of the sort. I still do not understand why the word “deuces” is in plural, but all the same I feel much better now. 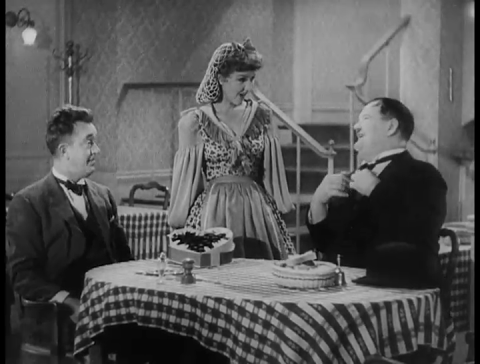 The Flying Deuces, plural or not, is mostly interesting because it is part of the Laurel and Hardy legacy. This famous pair of comedians (or deuces, maybe) hardly need any introduction, so I will just say that their presence in the Internet Archive is considerably smaller than for some of their contemporaries, such as Charlie Chaplin or Buster Keaton. That is the main reason why it has taken until now for me to review one of their films, but also because those few feature films that can be found in the archive do not appear to be among their best.

The Flying Deuces is perhaps not their best either, but there are some really good scenes including an absolute classic just at the end. Some of the humour, however, feels very out-dated, especially some very long-winded chase scenes during the last fifteen minutes. But all in all, the film is a good introduction to Laurel and Hardy, and if you already like them, you will not want to miss this chance to see them do their usual routine in some pretty unique situations.

This film is best enjoyed for the wonderful timing and acting by Stan Laurel and Oliver Hardy. It is not without reason that these two have gone down as one of the best pairs of comedians in the history of cinema.