So, here we go again. Another new year begins, along with the usual celebrations. A few close friends; good food and wine; some fireworks. It is at times like these that one should perhaps, at least for a minute, stop and think about life. About how fortunate we are to be born at a time and place where there is really very little to worry about. Jean Renoir helps us find that reflective mood, through his 1928 masterful adaptation of H.C. Andersen’s La petite marchande d’allumettes (The Little Match Girl).

It was just before the great breakthrough of sound film, and the silent film medium was at its artistic peak. Europe was spearheading the development through filmmakers like Fritz Lang (e.g. Metropolis), Carl Theodor Dreyer (e.g. La passion de Jeanne d’Arc) and F.W. Murnau (e.g. Der letzte Mann). La petite marchande d’allumettes falls right into this tradition with its splendid use of composition, cutting, lighting and costumes.

I guess you know the story already from your childhood. A poor match girl goes out on New Year’s Eve to sell matches, even though her shoes and clothes are pitifully inadequate. When she fails to sell any, she lies down in the cold snow to dream about the toys she saw in a shop window. Renoir’s dream sequence bears traces of the German expressionism, which was extremely strong in Germany about this time.

This film is best enjoyed as a fine example of late 1920s European filmmaking. The film is short, but given the story it sets out to tell, it could not have been made much longer and still kept the interest up.

If you have been reading my posts about Ingeborg Holm (1913), Berg-Ejvind och hans hustru (1918) and Klostret i Sendomir (1920), then you know that I, along with many others, consider Victor Sjöström to be one of the greatest directors of the 1910s and early 1920s. Perhaps the peak of his creative period came with Körkarlen, best known in English as The Phantom Carriage.

Körkarlen is a many-layered story about alcoholism, poverty, death and humiliation, but also about love, faith and atonement. It often balances on a thing edge between realism and sentimentality, and mostly manages to stay clear of any excesses in either direction.

The story is based on a novel by Swedish author Selma Lagerlöf (Nobel prize winner), and closely follows the original. At the core of the story, we find the Salvation Army sister Edit. She has been trying to save David from his sinful life in alcholism, but David has no wish to repent. That is when Death’s coachman (who drives around to collect the souls of the dead) steps in, and when David appears to die after a drunken brawl on New Year’s Eve, the coachman takes David on a journey through time and space to make him see the wrongs of his life.

The score of this version must be characterized as ambient. It is very mood-setting, but sometimes it seems to miss the mood a bit. On the whole, it works well, but I am sure better scores exist.

This film is best enjoyed as a true classic and an excellent example of Swedish film making around 1920. If anyone sees parallels with Dickens’ A Christmas Carol, that is no coincidence (compare Scrooge (1951)). Lagerlöf said herself that the story was inspired by Dickens, though this is far more than just a cheap imitation. Körkarlen deserves to be enjoyed on its own merits. 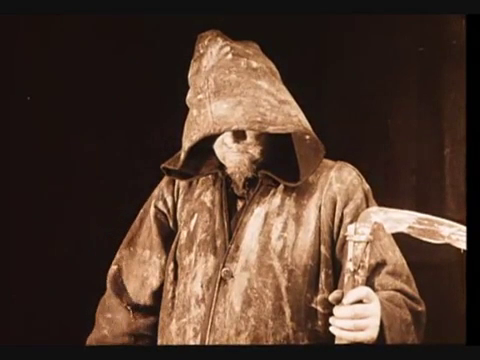