In 1928, just before making his last silent films, Buster Keaton moved from United Artists to MGM, a move that in retrospect ruined his career. In a very short time, he went from making immortal silent classics like The General (1926) and Steamboat Bill, Jr. (1928) – films where he had total creative control – to acting in cheap comedies. In between, he got to do one single film for MGM in his own trademark style, The Cameraman. 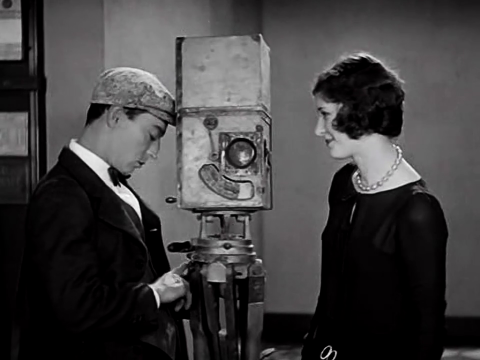 Keaton plays a still photographer who wants to become a newsreel cameraman. He also falls in love with a secretary at MGM, so he spends the rest of the film trying to impress both her and his boss. Further complications involve an ill-tempered policeman, a gang-war in Chinatown and an organ-grinder’s monkey.

It is interesting to compare this film with Vertov’s Man with a Movie Camera (1929). Even though they are vastly different films, they give much information about what camerawork was like in the 1920s. Note, for example, how light the cameras were. With the coming of sound, cameras had to be made noiseless, so they became much heavier. The advanced camerawork of the 1920s was not to be seen again for many decades.

The Cameraman was co-directed by Edward Sedgwick, who went on to direct several Buster Keaton comedies. Since Keaton had by that time lost his creative control, quality varied wildly, but for instance Speak Easily (1932) is worth watching.

This film is best enjoyed for its high comic and romantic values. Perhaps to an even higher degree than other Keaton films, this one features some excellent acting. In some scenes, the acting is very low-key, very beautiful, and really more reminiscent of what would be typical in Hollywood ten or fifteen years later.

When I was a young man in the 80s and 90s, I used to think that I was living in a good world. That humanity, generally speaking, was going in the right direction and that we had a bright future ahead of us. Well, time has moved on, and so has my mind. Nowadays, I tend to be increasingly cynical about the future of mankind. Perhaps that is why I am writing a blog about cinema instead of anything important. A form of denial. Do something fun, and anxiety may perhaps be kept at a distance for a few hours more.

But even in the world of film, reality creeps up every once in a while, even though it is reality filtered through the minds and performances of the filmmakers. A good example of this is Robert Kane Pappas’ documentary Orwell Rolls in His Grave. Even though it is more than ten years old, it still has some interesting things to say about where today’s media are headed. 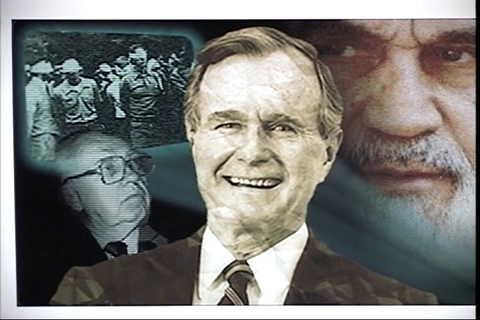 It is important, when watching a film like this, to realize that it is not a balanced account of the state of things. Quite to the contrary, every person in the film who is allowed to speak freely is someone who shares Pappas’ point of view. That is not to say that it lacks value, nor that there is no truth in it. As a matter of fact, I find it absolutely terrifying to ponder the kind of world we are living in if only half of the accusations are true, and especially given developments such as the NSA surveillance, that were not known when the film was made.

Yes, the film is relevant, in spite of its age, and even though it has in some ways aged considedrably. There is much reporting about George W. Bush, for example, who was president at the time. Today, we tend to think that Bush was some kind of cruel American joke on humanity, not deserving to be taken seriously, but back then Bush was actually real and his statements and actions carried meaning.

The strength of this documentary, and the reason why it remains relevant, is the way in which it intertwines interviews and other typical documentary material with quotes from George Orwell’s book Nineteen Eighty-Four. As I have already noted in my review of the 1954 film Nineteen Eighty-Four, the US is not Oceania, and there is no reason to believe that it will turn into Orwell’s dystopia. But the allegories in the book and film are perhaps even more relevant today than they were when the book was written.

This film is best enjoyed when you are ready to step out of your bubble for a moment and look at some not so very nice aspects of reality. 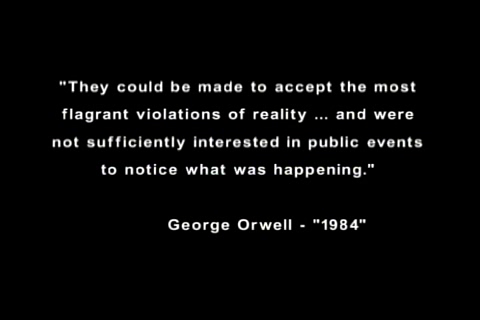