We continue our Short Film Month with a look at an old Disney character. Well, almost. The film is The Merry Old Soul and the character is Oswald the Lucky Rabbit.

Oswald, so the story goes, was Walt Disney’s first important character for his animated films. But Disney was at the time working for Universal Studios, who therefore owned the character. When Disney and the studio failed to come to terms about the future of Disney and Oswald, Disney decided to leave Universal and create his own character (of very similar appearance), Mickey Mouse. The rest is, as they say, history.

But Oswald lived on, and prospered for a time. There were lots of post-Disney films with the character, and The Merry Old Soul is only one of them. In this film, Oswald has gone to the dentist with a bad toothache, but during the visit he hears a message on the radio that Old King Cole has the blues. Oswald runs away to rally all the comedians in Hollywood to try to find a cure. The assembled host includes a great many Hollywood celebrities, including Charlie Chaplin, Buster Keaton, Harold Lloyd, Laurel and Hardy, and even Greta Garbo! The whole affair eventually spirals out of control into a pie-in-the-face orgy.

If you are curious about Oswald the Lucky Rabbit as a Disney character, a few samples are available at the Internet Archive, for example the nice short Oh Teacher (1927).

In later years, the Disney company has actually purchased the rights to Oswald, who is therefore once again a Disney character. Oswald has since made some appearances in video games, films and comics.

This film is best enjoyed for lovers of old movie stars. If that is your bent, then you are wont to get your satisfaction here, and it is quite a lot of fun to try to figure out who everyone is. In addition, though the animation is a bit simple at times, many of the gags are really good. 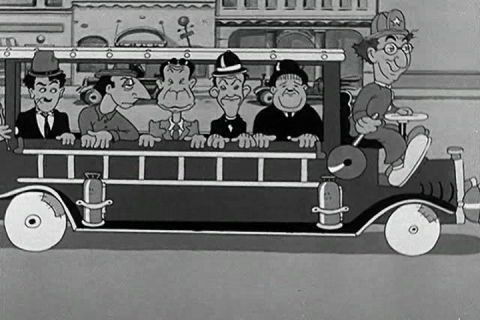