It is perhaps tempting to believe that the idea of putting Sherlock Holmes in a contemporary setting is a recent idea. Not so. That gimmick has been used at least since the 1940s, when the American producers of new Sherlock Holmes films deicded to enlist Holmes and Watson for the ongoing war effort. In Sherlock Holmes and the Secret Weapon, as well as several other films from the war years, they help fight Nazi spies in England. This in spite of the film being based on an original Arthur Conan Doyle story.

The film begins in Switzerland, where an inventor has constructed a new revolutionary bomb sight. He wants to offer it to the English government, but the Nazis are wise to his intentions, and so the chase begins. The rest of the film depicts the efforts by both sides to gain control of the inventor and his plans. Professor Moriarty naturally turns out to be the leader of the Nazi spies, and the thing turns into a battle of wits between the two master minds.

Sherlock Holmes and the Secret Weapon was Basil Rathbone‘s fourth Sherlock Holmes film, but only his second by Universal Studios (the first two were made by 20th Century Fox), and the oldest of his Sherlock films available at the Internet Archive.

Fans tend to be divided regarding Nigel Bruce as Doctor Watson. Many see him as the classic Watson, but others, myself included, think he is way too thick-headed, contributing very little beyond cheap comic relief. Still, it must be admitted that Nigel Bruce was a competent actor, and he did the best he could under the circumstances.

This film is best enjoyed because of Basil Rathbone’s usual excellent performance. His Sherlock is possibly the coolest and most laid-back. As much as I enjoy Jeremy Brett or Benedict Cumberbatch, Holmes on screen does not get more classic than this. As an added bonus, Lionel Atwill does a very sinister Professor Moriarty. 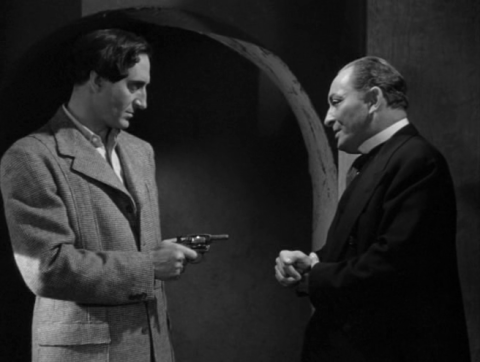 I have written before about Basil Rathbone as Sherlock Holmes. All in all, he made fourteen films about the detective, and in addition to that radio plays and stage plays. A number of the films (and several of the radio episodes) are available at the Internet Archive, among them his eleventh Sherlock film, The Woman in Green.

The film opens with a voice-over narration, but as an oddity, the narrator is not Doctor Watson. The voice belongs to Scotland Yard inspector Gregson, who takes the place in the story normally held by inspector Lestrade.

A serial killer is at large in London, and Sherlock Holmes is the only one who can stop him. The killer strikes at women, and after the deed is done chops off one of their fingers. The tracks eventually lead to a hypnotists’ club where Holmes and Watson face some serious peril, not to mention the notorious Professor Moriarty.

For the well versed Holmes fan, this is a fairly interesting and novel story. Like many other Rathbone films, it is not based on any of the original Doyle stories. There are some logical holes in the plot, but none glaring enough to take away the enjoyment of watching.

The crew makes good use of low angles and effective lighting, lending a dramatic, almost melodramatic, aspect to many scenes.

This film is best enjoyed for Basil Rathbone’s iconic portrayal of the great detective. There are good reasons why he remained the King of Sherlock Holmes actors for decades. And even though he may have since been dethroned by Jeremy Brett and Benedict Cumberbatch, and perhaps even Robert Downey, Jr., his performance is nevertheless a pure joy to behold. 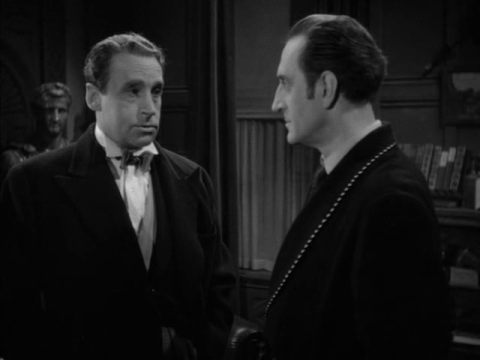