To document a single day in a big city, without doing so through the viewpoint of a single protagonist, would perhaps seem like a pretty rotten idea. Yet that is what the film Berlin: Die Sinfonie der Großstadt (Berlin: The Symphony of a Metropolis) sets out to do. And thanks to the excellent filming and cutting, there is not a single dull minute in it.

In fact, it is not entirely correct to say that there is no protagonist in the film. The protagonist is the city itself. All the people we see are deindividualised and impersonal, but they are part of the larger entity and organism that makes up the city they live in. You can choose to see the people as the air that the city breathes.

The film is subdivided into five acts, each of which deals with a particular part of the day. For example, the film begins with a train moving into the city, and through the eyes of people arriving with that early morning train we see the city slowly waking up. Another act deals with people going to lunch, and in one of the film’s many instances of dry humour, the lunching Berliners are shown interfoliated with animals at the Berlin Zoo, also eating their lunches.

As a piece of trivia for Charlie Chaplin fans, Chaplin’s legs can be seen briefly, as a cinema audience watch The Gold Rush, and the lower part of the screen is captured in the film.

The copy at the Internet Archive is not subtitled, but that is not a problem. Except for a few street signs and title cards announcing when the various acts begin and end, the only language you will find is the visual language of film itself. Director Walter Ruttmann wisely decided to tell the story entirely through images, with no help of words.

This film is best enjoyed as a one-way time machine. In its own time, I suppose the film was mostly conceived as a work of art. But today, you get to see the fashion, architecture, cars, trams, horse-drawn carriages and a myriad other everyday aspects of life in Berlin as it was 90 years ago. This is especially interesting when you consider that only a few years later, the Nazis were to take over, and in less than 20 years, most of the city would lay in ruins. The film allows us, for a brief hour, to take part in the lives of people who are no longer living, and to breathe with a city that is now a totally different entity. 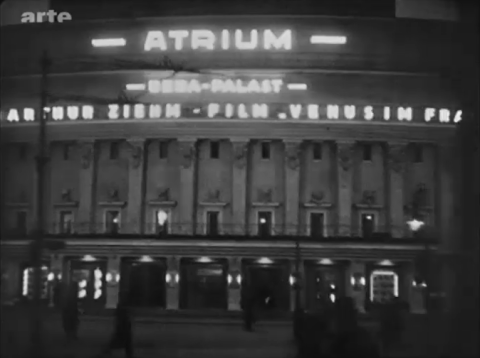 With the Winter Olympics in full swing, I wanted to try and find a film with a winter sports connection for this week’s post. That was harder than I had thought, but luck was on my side and the only feature-length film I found on that theme turned out to be really interesting.

Der heilige Berg (The Holy Mountain) is a German silent which is often mentioned as Leni Riefenstahl’s first film (as an actress). But Riefenstahl, quite frankly, was far better a director than an actress, and the film is interesting today mainly for other reasons.

The film is built around a very simple (and quite frankly somewhat far-fetched) plot about a love triangle where two friends, initially without realizing so, compete for the same woman (played by Riefenstahl). About the only strong part of the plot is the ending, which is moving (though a bit pathetic). But Der heilige Berg is not much about love and friendship anyway, nor about any specific characters.

This film resounds with two dominant chords, both vibrating with messages about nature. First of all about the wild, fierce and uncontrollable nature around us; especially the snow and the mountains, as contrasted by the sea. And second about human nature, more specifically it strongly romaticizes a physical ideal that lies close to the ideal of our own time. A sound mind in a sound body. That kind of thing. (The Nazis made this ideal their own, but director Arnold Fanck, though later forced to join the Nazi party, does not seem to have been a Nazi at heart.)

One section in the film shows a competition in Nordic combined, an interesting sport where ski jumping is combined with a cross-country ski race. The scenes from the competition are lengthy, but the interest is kept up all the way due to the excellent filming and the great variety of the scenes. It is also amazing to see what could be achieved even with the relatively primitive equipment they had available.

Der heilige Berg was made during the height of German Expressionism, and though it is sometimes cited as part of that movement, it is really much more strongly rooted in romanticism. There are touches of expressionism, such as in the exploration of the darkness of the human pshyche, but not at all as much in focus as in for example Sunrise: A Song of Two Humans (1927).

This film is best enjoyed for its beautiful images and for its documentation of winter sports in the 1920s. Russian officials will be glad to know that it is free from any dangerous suggestions of homosexuality and thus perfectly safe to watch.