There is a lot of German film at the Internet Archive. There are German wartime newsreels, silent classics from the German Expressionism and World War II propaganda such as Kampf um Norwegen, just to mention a few important categories.

Der Mann, der Sherlock Holmes war, this week’s film, has nothing to do with wars nor expressionism, however. It is a very refreshing mystery comedy, and as the title implies there is also a Sherlock Holmes connection.

The film begins with two persons, dressed up as Sherlock Holmes and Dr. Watson, stopping a train in the middle of the night in order to get on board. We soon find out that they are not the famous detective and his companion at all. Exactly what they are after is something we are not told at this point, but everyone fall for their ruse. The train personnel do everything they can to help them, while a couple of criminals on board bolt for the woods, just in case, leaving their baggage behind. “Watson” and “Holmes” soon encounter a couple of very nice women in the next compartment and promptly develop a romantic interest.

This beginning may sound a bit convoluted, and I guess it is. And even while the rest of the film follows the same pattern story-wise, it is made with such charm and skill that I am drawn into the fiction without reservation or hesitation.

The Sherlock Holmes fanatic will be disappointed to learn that the “real” Holmes never shows up in this film, but as a consolation, there is a fictional Arthur Conan Doyle who appears briefly on a few occasions.

The film is set largely in and around the 1910 World’s Fair in Brussels. In addition to the themes of fake identities and romance, we find elements such as rare postage stamps, forgery and a strange inheritance. The whole thing ends with a trial in a gigantic courtroom. A worthy conclusion of a film that, all things considered, must be said to be well worth a watch.

There are no subtitles for this film, so stay away unless you know German.

This film is best enjoyed for the brilliant actors. Hans Albers is often recognized for his excellent portrayal of the fake Holmes, but Heinz Rühmann is perhaps even better as his equally fake Watson sidekick. 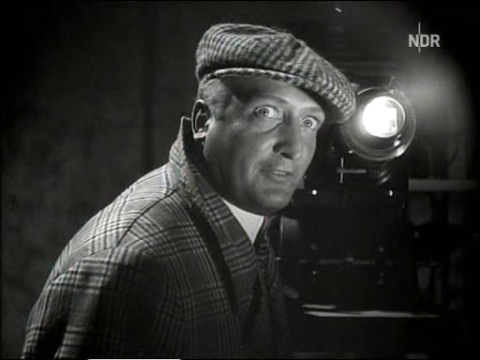 Sometimes, I find myself watching a film for very strange reasons. X Marks the Spot, for example. I was looking at this blog’s alphabetical list of films, and realized that I had blogged about films starting with every letter in the English alphabet, except X. I am a fan of balance, unity and harmony, so I set about to find myself an X film at the Internet Archive (no, not that kind of an X film). This proved easier said than done, but two films eventually turned up with the title X Marks the Spot. Finding that one was a remake of the other, I went for the original, and to my great satisfaction, it turned out to be quite a gem of a film. 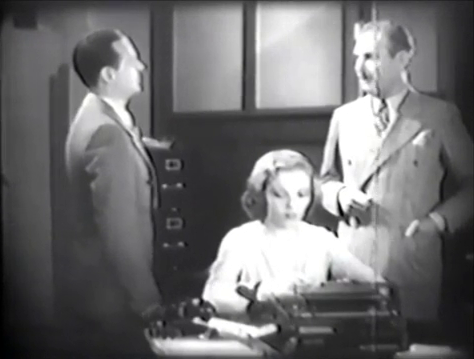 Before I go on, I should probably mention that there is one big problem with the available copy: image quality is terrible. A good copy may not exist. Apparently, the original negative was deliberately burnt during the filming of the great fire in Gone with the Wind (1939). Sound is not great either, but good enough, especially considering that sound in the early 1930s was not very good even under the best of circumstances.

The plot is difficult to describe without giving away too much, but it involves a reporter who needs money for an operation to save his sister’s life. He puts himself in debt with a criminal, only to find, years later, that he may have to cash the debt in an unexpected and unpleasant way. Wallace Ford plays the reporter and Lew Cody gives us a genre cliché with his hot-tempered editor-in-chief.

The best thing about X Marks the Spot is the snappy and often funny dialogue. Accounts differ regarding when the first real screwball comedies were made, but this is definitely a big step in that direction, even though some say that proper screwball only appeared a few years later.

As I hinted above, a remake with the same title is also available at the Internet Archive. From what I have been able to find out, however, it is not as good as the original.

This film is best enjoyed if you like The Front Page (1931) and want more of the same. X Marks the Spot is not quite as good, especially not the actors, but it shares similar environments, similar dialogue, and there are some parallels in the plot, also. Sensitive viewers will be advised that the film contains some unfortunate racial stereotyping. 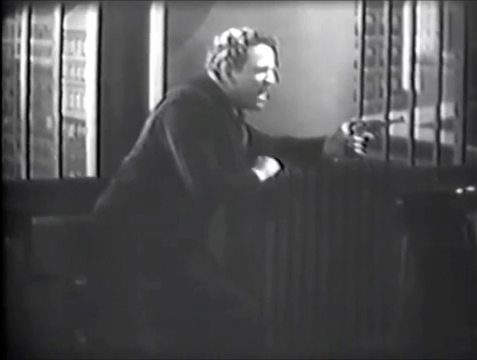 Over 70,000 people were killed as a direct result of Hitler’s Aktion T4 in the early stages of World War II. Some were jews, but many more were mentally or physically handicapped children and adults that, so Hitler said, would have meant an unnecessary cost for the “Vaterland” in times of war. As terrible as it is to think about all that, there was one arguably good thing to come out of that terror, namely the propaganda film Ich klage an, financed and produced to gain popular support for governmental use of so-called euthanasia (mercy killings).

Thomas Heyt is a medical doctor with a good career and a loving wife. But his life is turned upside down when his wife Hanna becomes the victim of severe, painful and potentially lethal mutiple sclerosis. Heyt seeks in vain for a cure, but Hanna’s condition becomes ever worse. She asks him to take her life before her pain becomes unbearable, which he eventually does. This, however, is not the end of the film, because Heyt thereafter has to stand trial for his actions, accused of murdering his wife.

When I first saw the film, I had no idea about its connection with Aktion T4. Nevertheless, I expected a propaganda film, but I was surprised to see how mild the propaganda is. So mild, in fact, that if it were not for its connections with Nazism, it could very well still be used to argue for voluntary euthanasia (and sometimes is, for that matter). The film does not in any way bring forth the subject of involuntary euthanasia that was actually the foremost purpose of Aktion T4, but it stays ethically within what several democratic countries legally allow today, apparently including the state of Oregon.

In an ironic twist of fate, the film came too late to save the project that had spawned it. In what has been described as the only successful popular protest against Hitler, public opinion was so strongly against the project that it actually had to be cancelled in 1941, only five days before Ich klage an premiered, heavily censored due to the criticism. (I am not sure whether the copy at the Internet Archive is the original or censored.) But even though Aktion T4 had been officially cancelled, Euthanasia according to the guidelines adopted by the project continued in many places throughout the war, killing tens of thousands more.

The available copy of this film has a unique feature, one that I have never seen before. The initial frames of the video file contain a slideshow with very interesting background information about Aktion T4 and about the film itself. If you have a player that can freeze the film on the first frame, and then step frame by frame, I can highly recommend these interesting slides, either before or after watching the film itself. The slides are pro-euthanasia, as is the film itself, but regardless of your own opinion on the subject, they provide a good historical background.

This film is best enjoyed in one of two very different ways. It can either be seen from a historical perspective, remembering that it comes from the same ideas and ideals that led up to the holocaust. Or it can be seen purely as a work of art: a film which, though controversial, is rich with excellent dramaturgy and acting. Indeed, these two perspectives may not be possible to disassociate entirely; they certainly complement one another and provide the watching with further depths.

Motion pictures today is very much a man’s world. Sure, there are many strong women in popular movies, but they are always sexy and usually there is also a strong man somewhere in the background to help out when needed.

This has not always been so, however. It may perhaps surprise some to learn that in the days of silent cinema, strong and independent female characters where not at all uncommon.

With La Passion de Jeanne d’Arc (The Passion of Joan of Arc), director Carl Theodor Dreyer created a film which is so powerful, so naked and so immediate that it still, over 85 years later, will take your breath away.

The film was made in France, with actress Renée Jeanne Falconetti (usually credited as “Maria Falconetti”) in the title role, but the director is Danish, and it was also first screened in Denmark.

The director’s own copies of the film were destroyed by fire (a fate shared with many a silent film) and for many years only inferior copies, not approved by the director, were available. But in the 1980s, a single remaining original copy surfaced in Oslo, Norway.

In my opinion, there is only one problem with this film. Dreyer based the film very closely on historical transcripts of Joan of Arc’s trial, but gives us next to no background. In the beginning, only the title tells us who the central character is, and we are not informed of the place, the time, or any other characters. In a way, this beginning strengthens the force of the narrative, but since Dreyer binds himself to telling the story in strict linear fashion with no apparent deviations from actual historical events, the viewer is left even at the end with next to no knowledge of why anything in the movie happened in the first place. The viewing experience is totally dependent on whether you know the background or not.

In spite of this, La Passion de Jeanne d’Arc is a must see for every cineast. It is one of the most important films in the history of silent cinema, and it is a powerful experience.

This film is best enjoyed as a celebration of International Women’s Day, the 8th of March every year. 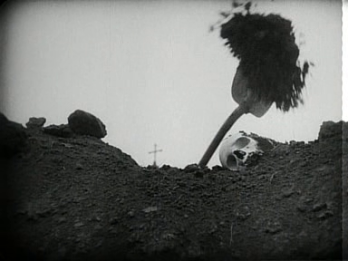