It seems to me that there is often something special about films set during the period of king Louis XIII (with Cardinal Richelieu in the head of government). I guess it is the gilt from The Three Musketeers, with all of its nice adaptations, that rubs off a bit. One such film that can be found at the Internet Archive is Under the Red Robe.

This romantic adventure finds the swordsman Gil de Berault in trouble. He is in danger of being executed for duelling, but the sly Cardinal Richelieu gives him an opportunity for pardon if he can find and capture a rebellious protestant. de Berault eagerly sets off to do the task, but as the plot progresses, he is about to find obstacles he had not anticipated.

The director of this typical genre piece was Victor Sjöström (sometimes called “Victor Seastrom” in Hollywood, as also in this British production). Sjöström started making film in Sweden, where he directed simple melodramas in the early 1910s. He quickly moved to more advanced topics, and made several timeless classics, such as The Outlaw and His Wife (1918) and The Phantom Carriage (1921). Sjöström was recruited to Hollywood, where he also made several very good silents, but in the early 1930s, he moved back to Europe. He still acted and produced films, but for some reason he directed very few of his own in the sound era. Under the Red Robe, his last film, is nowhere near as groundbreaking as some of his classic works, but it is a nice piece of craftsmanship.

Unfortunately, the copy at the Internet Archive is pretty blurry in places, and contrast is poor overall. I know of no better online version, however.

This film is best enjoyed if you are a fan of either Conrad Veidt (de Berault) or Raymond Massey (Richelieu). Both are very good, even though I think Massey (always an enjoyable and dedicated actor) perhaps overacts a bit at times. The female lead, Annabella, is given first billing in the credits, but even though she is also good as the sister of the religious rebel, she is mostly forgotten nowadays. 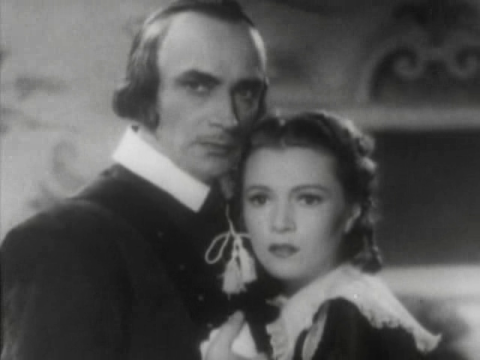 Imagine being kicked in the shin. Repeatedly, over and over again, for almost two hours. That is what it feels like to watch The Star Wars Holiday Special. I normally try to stay away from writing about bad movies on this blog (although on occasion I make an exception or two), but this is one you just need to experience because, you know, you have to see it to believe it.

Everyone knows that the first Star Wars film premiered in 1977. Less well known is that The Empire Strikes Back (1980) was actually not the second part of the saga. That honour goes to The Star Wars Holiday Special, which made its TV premiere for the Christmas season of 1978. Here, you will see Mark Hamill, Harrison Ford, Carrie Fisher, Anthony Daniels (C3PO), Peter Mayhew (Chewbacca) and James Earl Jones (voice of Darth Vader) reprising their roles from the first film. However, none of these are the main characters. Instead, the action centres around Chewbacca’s family – his father, wife and son – living in a tree house that would have made Johnny Weissmuller green with envy.

This is where the Holiday Special’s problems start. Through much of the film, these relatives just walk around, howling their lungs out in poor imitation of wookie language (which, embarrassingly, was created by Ben Burtt himself). The so-called story, about Chewie having to make it back home in time for celebrating the all-important Life Day holiday, is stupid enough in itself, but every step of the execution just keeps making it worse, and then worse again.

There is actually one segment of the Special that is rather good (when compared with the rest). About halfway through, there is a ten-minute animated short film. The inclusion of this is incredibly silly, plot-wise speaking, but when seen in isolation, the animation (which is not in any significant way connected with the rest of the plot) has a number of redeeming features. Sure, the animation is a bit too cartoonish and the voice actors (also the original cast, as far as I can tell) certainly did not put their souls into the job. But on the other hand, and very much unlike the rest of the Special, it has a lot of nice Star Wars-esque alien planet environments. The story is simple but not bad. As an oddity under the Star Wars brand, this short is well worth exploring. Also, it is the first-ever appearance of Boba Fett.

Since The Star Wars Holiday Special has never been restored and officially released after the original airing, copies found online tends to be of really low quality. The main copy at the Internet Archive is the best I have seen, with almost-decent technical quality. There is also another version available, with worse quality, but on the other hand it comes with all the commercials from the original airing. They provide a welcome break from the inanities of the Special, and also add some unintended entertainment of their own.

This film is best enjoyed because you know that pain is your friend. Besides, what does not kill you will make you stronger. George Lucas has allegedly gone on record saying that, if he could, he would smash every existing copy of this film with a sledgehammer. This in itself is reason to watch it. Also, when properly applied it can actually be useful. Carrie Fisher has stated that she always puts this film on when she wants her late guests to leave the party.

By 1922, Douglas Fairbanks was making great leaps in the advancement of filmmaking. Two years before, he had made The Mark of Zorro, the first true romantic adventure movie, and in 1921 he followed it up spectacularly with The Three Musketeers. This year it was time for the making of the next classic movie adventure, Robin Hood.

Many accounts associate Robin Hood with Robert of Locksley, a historical character, though it is by no means proven that he has any real connection with the Robin Hood of legend. The early accounts are in agreement, however, that Robin Hood was a yeoman, a free man below the nobility in status. Fairbanks, however, makes Robin into one of King Richard’s most trusted advisers, before voluntarily becoming an outlaw in order to better be able to rebel against Prince John. In this version, Robin Hood is the Earl of Huntingdon, an identity that was ultimately derived from a 17th century play.

One of the most influential Robin Hood tales in popular culture is Sir Walter Scott’s novel Ivanhoe. Fairbanks shows that he is influenced by Scott’s work, not only by the Lionheart connection, but even more clearly by having King Richard appear as an anonymous knight after his return to England.

Robin Hood remains an excellent picture, over 90 years after its premiere. The sets are splendid and majestic. In fact, the mediaeval halls and castles were never so spectacular in real life as they are in Hollywood. Fairbanks weaves legend and fairy tale, and he does so with an elegance that few later Robin Hood accounts can match.

This film is best enjoyed for Fairbanks’ athletic version of Robin Hood. There are a good many nice stunts, especially towards the end of the movie.